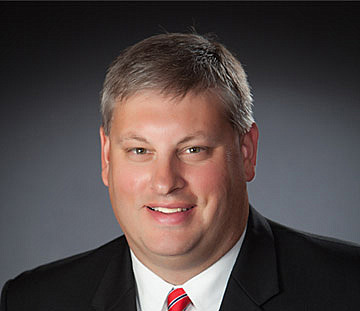 Lee Mills was born in Decatur, AL on December 10, 1974. He graduated from Austin High School in 1993 and earned a B.S. in Aviation Management from Auburn University in 1998.

From an early age, Chairman Mills wanted to be a pilot. He began flying at an early age. He received his private pilots license when he was just 17.

Soon after graduating from Auburn, he landed his first airline job with Comair Airlines. While at Comair, he flew the EMB-120, Canadair CRJ-200 and the Canadair CRJ-700.

To date, he has over 10,000 hours of flying time and enjoys flying general aviation airplanes when he is not flying for work.

He was appointed to the State of Tennessee Nursing board by Governor Bill Haslam in 2015 and also serves on the Board of Governors at St. Francis Hospital in Bartlett.

His hobbies include photography, graphics design, and he is a HAM Radio Operator (N4FDX).

Lee and his wife Amber reside in Arlington and have two sons, Grayson (9) and Tanner (6). Both sons attend Arlington Community Schools.

The Mills’ are active members of Bellevue Baptist Church.